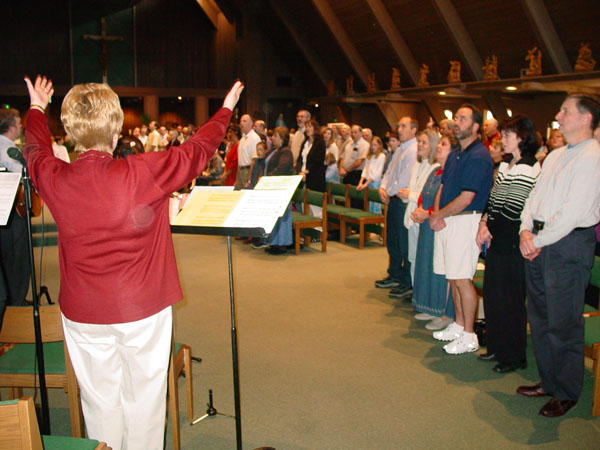 As a cantor, your primary role is to sing the psalm but you may also have a role as a song leader, or animator, encouraging the assembly to sing. You could be a song leader when your voice is the right one for the piece, you know the music, or you are the only one available!

It’s tempting for the song leader to sing at the front of church all the time but does that really help your congregation to find its voice or could you be discouraging them from singing?

You may be a song leader because the rite suggests one, the style of music requires one or the assembly needs the assistance of one.

The rite suggest a song leader

Penitential Act
The Penitential Act is not just a call for forgiveness (“for the times we have sinned by…”) but a recognition of Christ’s goodness that he frees us from our sins (“You were sent to heal the contrite…”). The tone of the Act changes depending on the season of the year. During Advent, it is a joyful, hopeful litany as we wait for the coming of Christ. During Lent, it reflects the penitential tone as we are called to turn away from sin and back to Christ.

If the form of the Act includes “tropes” (“You were sent…”), these can be sung by a cantor instead of a priest. The absolution (“May almight God have mercy on us…”) is always reseved for the priest but the cantor may lead a sung Amen. The Acclamation welcomes and points us towards Christ, who is truly present in his Word in the Gospel.

The Acclamation starts while the priest is making his silent prayers or the deacon receives the blessing to proclaim the Gospel. Don’t hurry from the second reading straight into to the Acclamation. Allow silence to take hold so that people can ponder the word they have just heard proclaimed. Let the reader leave the sanctuary before starting the Acclamation.

Instead of singing the verse of the Acclamation, you could ask the reader to speak it and sing only the alleluia refrain.

If you have a procession of the Gospel book to the ambo, you might need extra verses to accompany this, and if the book is moved from the ambo to a separate stand after the reading of the Gospel, you could repeat the alleluia refrain then.

General Intercessions
Sometimes, singing the response to the intercessions can lift people’s prayers, especially during particular seasons of the Church’s year. Liaise with your intercession writer before attempting this. You may ask the priest to end his introductory prayer with a prompt, such as “…as we sing” so you can sing the response first, ask the assembly to repeat it and then sing once after each intercession. Gentle background chords on guitars or keyboard could be used while the intercession is spoken.

You may choose to extend the Lamb of God into the start of the communion chant by incorporating extra verses (Jesus, redeemer of the world; Jesus, living word…) after the priest has raised the consecreated bread and wine and the assembly responded. If you are using Marty Haugen’s Mass of Creation, the Lamb of God can be merged into his Communion song, Come and Eat this Bread (both available in Laudate).

The style of music suggests a song leader

Call-response (“repeat after me”), verse-refrain (communion psalms) or Taize chants suggest the need for a song leader to help the assembly to join in.

The assembly needs a song leader

The introduction and bedding-in of new music requires a cantor experienced in introducing new music.

If you are singing unaccompanied, a song leader is needed. You may need to sing throughout the song, or maybe your assembly just needs you to start the piece, or to start each verse. If you are not confident to pitch the starting note, use a tuning fork, keyboard, strum of a guitar chord, a piano app on your smartphone. If you have no other means of starting off, you can avoid starting too high or too low by humming the highest and lowest notes of the piece to yourself to find the best fit.

If there are insufficient “lead” instruments, you may need to provide a strong lead. If guitars are the only instruments accompanying the song, an introduction made up of a few chords may not help the assembly start singing.

Don’t cantor just because you are “the” cantor. Let the assembly’s need for leadership drive your involvement, not your need to lead. If they don’t need you, take a step back and let their voice be the lead.

The cantor is not a dominant figure in the liturgy. Everything you do must enable the assembly to participate and find their own voice. Never be a “distraction from the action” that is taking place on the altar or elsewhere. Less is more, so your primary role, as a psalmist, becomes more pronounced. You can indicate to the assembly when to join in and what to sing in a number of ways.

Pitch conducting – raising and lowering your hand in steps to indicate changes in pitch – is useful for indicating new tunes. The steps don’t need to be linear as if you were playing a piano; if you need to accentuate a jump in pitch, move your hand further.

Once the assembly has picked up the tune, a simple raised hand to indicate “your turn” is usually sufficient, or an expectant gaze and raised eyebrows. Practice your gestures in front of a mirror. Are they too distracting? Are people looking at you instead of where the ritual action is happening?

Apart from the psalm, the cantor ideally shouldn’t use the ambo, which is reserved for the proclamation of the word. If the layout of your church permits, you should stand somewhere towards the front of the church, where you can be seen by the assembly but are not a distraction, and where you have clear sight lines to your musicians.

If the organ in your church is at the back and you are at the front, there may be a noticable time delay between the two. Agree with your organist how to handle this. It may be best for the organist to set the speed and for you to follow. If you both try to accommodate each other, the tempo will slow.

Organise your books, maybe with sticky tabs for easy access to the songs you are using. Put papers in a binder and don’t shuffle them while singing – if you are singing at a microphone, your page turning may be picked up.

Stand straight, feet apart and in line with your shoulders. If nervous, put your hands on the music stand. Smile! Your voice will sound brighter and people respond more to somebody who looks welcoming – even if you feel nervous inside. Breathe deeply, from the diaphragm.

Try to look out at the assembly wherever possible, rather than down at your music. You will produce a clearer sound. If you’re afraid of catching somebody’s eye and being distracted, fix your gaze just over the heads of the assembly to a point on the back wall of the building.

You typically won’t wear an alb or clerical dress when cantoring, so dress appropriately for the type of service you are singing at. Wear shoes that are not noisy, especially if you have to move about during the service.

The acoustics of a full building are different to an empty one. You may need to overpronounce your consontants so that they sound clear. Diphthongs – two sounded vowels together – can be a problem in singing (e.g. the “iy” sound in life, or Christ; the “oy” sound in voice). Try holding the first vowel right until the end of the note – “Christ be our liiiiight”.

Make sure you have clear line of sight to your organist / keyboard player / instrumentalists and have agreed introductions in advance. As cantor, you may need to decide to extend a piece or cut it short – agree hand signals for those too.

If you are using a microphone, practice with it beforehand. Check whether the mic is uni-directional or omni-directional. Uni-directional pick up one voice very clearly – the mic at the ambo is likely to be uni-directional – and you need to stand further away than an omni-directional mic. If you can do so without it popping, turn the mic off when you are not singing so it doesn’t pick up background noise. Don’t sing too loudly into the mic – you don’t want to surprise people who have hearing aids tuned in to a loop system!

Think about when you receive Communion. The communion chant starts when the priest receives Communion so you may want to receive later in the procession, maybe once a hymn is established and the assembly don’t need you to lead.